It’s been a while since the last update to Revolver so this release is long overdue. Today I have released version 2 of Revolver, the scripting module for Sitecore. The timing of this release is in preparation for Sitecore Symposium Australia where I’ll be presenting on scripting with Sitecore. Of course I’ll be covering Revolver and I will also be covering other scripting modules available.

Anyway, back to the release.

There have been lots of changes to the module in this update, so let’s cover them off, starting with the biggest change:

Yes, I have removed the commercial licensing from the module. I am a huge supporter of open source software and I also use many open source tools. So it was kind of odd that I was going against open source and was holding the module as commercial. I’ve still got a bit of clean up I want to do in the codebase before releasing it into the wild, so I’m stopping short of going open source just yet, but I’m allowing it’s use free of charge.

This change in licensing was also encouraged by the other freely available scripting modules out there, the Sitecore Rocks Power Shell integration, Sitecore Rocks Query Analyser and the Power Shell Console. It was getting very hard to justify the cost of Revolver given the capabilities of the other modules.

The new search command allows searching within the Lucene indexes. It works in the same fashion as the find and query commands. The command is used to locate items and then execute some command against each item.

So if we wanted to search for any items that contain “Lorem” in the title field (left over test data anyone?) and just print the path to the item, we could use the following command.

Note that the fields used in the search are Lucene fields, not Sitecore item fields.

The Revolver application window now has a status bar to tell you when the client app is communicating with the server. This helps inform you about whether Revolver is waiting for your input or if it’s off and processing your data for you. 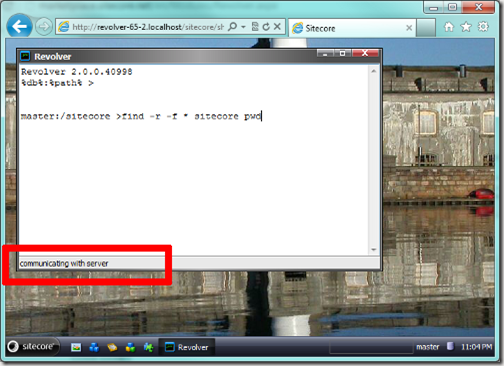 The find command has been updated to allow use of a wildcard field name when matching items on field values. This allows users to search inside all fields which can come in handy when trying to locate items that might contain a token in a number of different fields.

Sometimes when you’re searching for content you want to be able to exclude anything coming from standard values. For example, if you want to search for items that have overridden presentation. When using the find command you can pass the new flag -nsv (no standard values) to exclude standard values in the operation, and only assess items on field values they contain.

So to find item’s that have overridden their presentation we could use this command:

This version of Revolver has better support for item versions, allowing you to list the various versioned and also change your context to a specific numbered version.

To see which version you’re looking at:

To change to a specific numbered version of an item:

The cd command also got an update to make it easier to change your context between languages and versions.

Scripting also got better in this release of Revolver.

The new if command allows simple conditions to be evaluated using the expression syntax used by the find command. This can be used to ensure all the required parameters have been provided to a script.

The new exit command allows a script to bail out if required, such as when a parameter is missing.

The following example shows a check for the first parameter and exits if the parameter is not provided.

The second parameter to the if command if the command to execute if the expression evaluates to true.

The exit command accepts an optional message which will be output to the user.

Opens a content editor application with the current item selected

Get extended information about a specific field of an item

Replace a token in a field of an item

Don’t forget that help is built right into Revolver, so you can get more help on any of the commands by using the help command and passing it the name of the command you want help on:

Help is also available for scripts. Access it the same way:

So what are you waiting for? Jump over to the codeflood website and download Revolver from the Revolver Downloads page. You’ll also find the module soon on the Sitecore Marketplace.

Nobody faults you for trying to make a living off your hard work. That being said, thanks for open sourcing it.

Thanks Mark. (not quite open source just yet but it will be soon…just cleaning up the code a little)
But you know what, it feels good to open it up. I’ve received a lot of positive feedback from people for making it free and I’m happy to be contributing to open source software. I just hope people find it useful.